The Onion knocks on Playhouse door, tugs on heartstrings December 13, 2019

You don't throw baseballs in glass playhouses, especially not from right field. The Onion has written an article relevant to Sammy Sosa's Playhouse. All members of the Playhouse faithful would love for The Onion's satire to prove predictive of reality, but we know that the Ricketts Regime remains relentless in thier baseball moralism. It's a funny premise for an Onion article, but we'll try not to commit too many terrorist acts in response to The Onion's apparent inability to spell "McGwire." 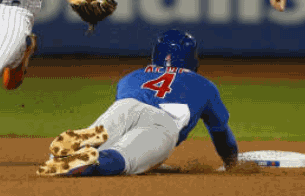 It has been a while since our last update, and in the fashion of true-blue Cubs fandom, it's apparently been a while since we've watched baseball, as a bombshell has been brought to our attention. We have indeed done it, Reddit. Cubs utilityman Tony Kemp has changed his jersey number from Sammy's #21, to the perfectly kosher #4. Kosher for us, anyway. Sorry, Jeff Blauser, we just don't care that much about you.

What is particularly inspiring about Tony Kemp's conversion to Sosalogical orthodox is that this jersey number change has happened while the season remains in-progress, as opposed to Tyler Chatwood who rightfully surrendered Sammy's captive number during the offseason. Under MLB rules, when a player changes jersey number in the middle of a season, he must personally buy out the unsold merchandise produced with the old number, with personal funds. To be fair, there are probably not that many Tony Kemp #21 replicas floating around the marketplace, but Tony still had to make a financial sacrifice to make jersey justice happen.

Sammy Sosa's Playhouse is taking full credit for this. Of course it was Tony Kemp who made this brave decision and deserves our praise, but we find it hard to believe that he would have concluded to make this change by a random change of heart. Tony Kemp must be an avid reader of the Playhouse, and he saw our open leader, taking it to heart. Thank you, Tony. We salute you now, and will remember you as a great Cubs legend when Tom Ricketts doesn't give you a contract this offseason.

The Playhouse does not take our position as the last bastion of integrity in sports journalism lightly. We understand we cannot be silent about the issues that affect the people. This isn't Michael Jordan's Sweatshop, we take pride in our duty to be a role model for the children, and a force for political change. It is for this reason that when we saw ESPN announce the 2019 lineup of their magazine's annual Body Issue and neglected to include Sammy Sosa, we knew we had to start our next campaign. Sammy Sosa's Playhouse is proud to announce our Change.org petition to Feature Sammy Sosa in the ESPN Body Issue. This campaign will be a major focus of The Playhouse from this day on.

Sammy Sosa's Playhouse is happy to have had answers to the questions brought forth by our followers and disciples over the years. It is a deep regret of ours that we have been unable to answer the question on many of your minds, that is, whether Sammy Sosa's penis is black, or white. With the ESPN Body Issue, the people can find out what they desperately need to know. Sign the petition. Tell your friends. Share on Social Media. Share on Antisocial Media. Let's #PopTheCork on #SammysCork

If your eyesight is accute to actually read the backs of the MLB jerseys this weekend, then you've noticed that every player has a nickname on the back. Raise your hand if you actually knew more then five of the nicknames before this weekend. Indeed, we've fallen quite far from the days of Crime Dog and the Big Hurt, and Abe "Knuckleball" Schwartz is here to tell you why that's a problem in the latest BON.

Major League Baseball's attempt to make non-pedophilic adults care the Little League World Serious corrupted last weekend's Cubs-Pirates series. Careful what you wish for, Rob Manfred and Theo "Jeffrey" Epstein, because the Little League Classic captured the attention of Playhouse Fascionista, Francine Fash. Uniform traditionalists might not like this one.

The Cubs may not be on WGN America anymore, but ESPN has made sure that the most popular Playhouse team is seen often by a national audience. As such, the politically post-geographic North side has the frequent "honor" of getting hear Alex Rodriguez commentate over the Cubbies, as they were officially dubbed during Sunday's Game of the Week against... the Pirates? Jajaja, that probably seemed like a better matchup in April.

A-Rod sent shockwaves through the Oppressed Gamer Community when he brought up, in a conversational tangent about the health of Kids These Days, that the current generation will not outlive their parents, and video games may be of blame. The Highly Heated Gamer agrees.