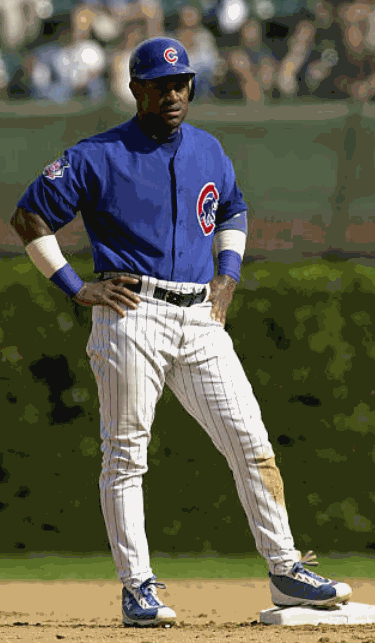 For the last decade, the Chicago Cubs have restricted the use of their alternate blue tops to road wear only. From the 1997 genesis of the ‘walking bear’ sets to 2008, the blue alts could be worn at home or on the road whenever the starting pitcher of that day chose to; current Chicago Dogs ace Carlos Zambrano was known for his particular fondness of these tops. In 2009 the Cubs altered their sets in two blasphemous ways: the worst crime was the removal of the red-brimmed cap from all road uniforms, but the error we are here today to discuss is the removal of the blue alternate from home jersey circulation. It has remained an option for the starting pitcher of any road game, but that liberty has not existed at Wrigley Field.

I am all for revoking the freedoms from our populace and there is something civilized about a lawful guarantee that at least one team in 81 Cubs games is to represent the traditional clash between white and gray, but Sammy Sosa modeled the blue top at home so beautifully from 1997 to 2004 that all should be convinced that the top belongs in tandem with white, pinstriped trousers.

It was in the blue top at home that Sammy Sosa hit his 20th home run in June of 1998. His 60th home run in 2001, which cemented him as the first and only man to hit 60 home runs in three separate seasons, was done with a royally clothed torso. To wear this fine jersey in the Friendly Confines is to remind future generations of Sosa’s glory.

And what a fine jersey it is, perfectly modeled to the physique of Sammy Sosa. Sammy liked to wear his sleeves short and tightly held against his protruding biceps. This cannot be pulled off by lesser men but should an individual with similar muscle arrive in the North Side, his arms will be gracefully noted by pure royal blue in a sight that must be seen in Chicago.

The 1990s were not a time which feared the control of the old. Teal, purple, black, and cool blue were the colors proudly displayed on the flags of the young revolutionaries. The ultimate trophy of our boldness was the combination of alternates in these colors and the home pants bearing pinstripes of the upmost tradition. We embraced the past but expressed our admiration by dragging it with us. That is the importance of wearing the alt at home. To keep it on the road shows weakness we must exterminate if our nation is to be built with any commitment.

The sun is finally rising, and change is coming. On June 25th and 26th against the Atlanta Braves in Wrigley Field, the Cubs wore their blue jerseys. This is the fist instance of the shirt’s collective home wear since 2009. As Fascionistas we must commend the Cubs for embracing this part of their culture.