Sunday the 18th represented Major League Baseball's celebration of the Little League Classic. This observation took form in making the Chicago Cubs and Pittsburgh Pirates dress like children in Little League-inspired uniforms. A pity how far western civilization has fallen, that we encourage our men to forever remain arrested in boyhood. This is disgusting as more than a symbol of degeneracy. These uniforms bastardize the rules of sporting uniforms in their usage of nicknames on the jersey. Cubbies? The Burgh? We are inching towards dangerously NBA territory, gentleman. These uniforms also feature nicknames on the back, which treads on the gimmick of Player's Weekend, which you can trust I will speak about very soon in the future.

However, the Cubs Little League Classic uniforms do feature a surprisingly beautiful diamond in what is a general rough. The chosen cap insignia is the 'Walking Bear' first introduced in 1997.

This is the right decision not only for a special uniform day, but for the Cubs uniform in general. I shall surprise my fellow traditionalists in my declaration that the Walking Bear should be adopted as the Cubs' regular cap insignia. Perhaps my opinion seems less blasphemous when I display my ideal cap on a real man like Sammy Sosa. 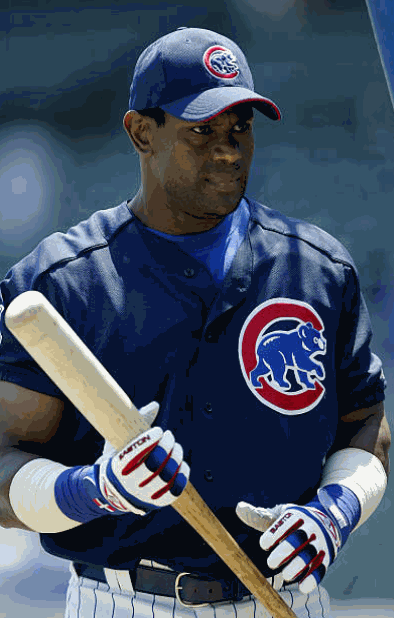 But yes, I do believe these are the hats that should be worn during all games by the Chicago Cubs. I do not believe uniforms should be allowed an existence in a vacuum. The New York Yankees may have the most perfect uniforms in the eyes of the traditionalist, but we all rightfully denounced the Florida Marlins when they attempted a mid-2000s alternate jersey that was a mere play of the Yankees pinstripes. The Cubs are not the only team with a cap bearing an insignia that is nothing more than a mere C. In fact, they are not the only team with a blue cap combined with a red C insignia. The C-cap teams should distinguish their C's from each other and cannot avoid comparison between them until such actions are taken. As it stands, the Cubs have the least interesting C in baseball. While the wishbone C used by the Reds may be the most used logo in all of C's, it is at least an effortful design. And while the block C used by the Indians is subject to negative comparisons with previous Indians logos, its collegiate-style block text is not mirrored by any Major League teams. The Cubs C is merely an incomplete circle. The Walking Bear would be totally unique.

On top of the comparisons which are necessarily drawn between Cincinnati and Cleveland, the Chicago Cubs must held to similar standards as the other Chicago team. The Chicago White Sox have worn C-insignias for much of their history. Many of their C's were quite enjoyable, particularly the final C they ever wore, modeled by Sammy Sosa. 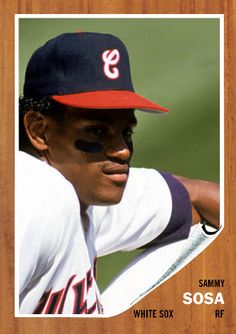 Even with that beautifully unique C, the White Sox received much criticism for wearing a blue hat with a red C, when their crosstown rivals wear the same. The White Sox wised up and introduced their "Sox" insignia, which has been worn ever since 1991 to universal praise. The letter used on a cap insignia always stands for the city name, not the mascot, unless explicitly specified otherwise. When there are two teams in the same city, it is arrogant for one team to wear the city's initial as the lone representative of the town, when the other team does not. Of course, the New York Yankees and Mets both wear the letters NY, but both franchises are complicit in that act of mutualism. The White Sox gracefully stepped down from claiming to speak for all of Chicago, it is time that the Cubs do the same. You may say the Cubs would have a C on their head no matter what because Cubs and Chicago both start with a C, but until an actual Cub is placed inside the C, it can only be assumed they are claiming themselves to be the sole speakers of Chicago.

Most importantly, the Walking Bear is representative of Sammy Sosa, and the number one duty of Chicago Cubs baseball should be to keep alight the legacy of Sosa. Besides being introduced at the height of Sammy's reign starting in 1997, the Walking Bear was a reflection of 1990s logo design trends. The trend in the 1990s was to create animal logos that were highly detailed and realistically drawn. This trend was more prevalent in other football and basketball, especially at the collegiate level, but in baseball we saw it with the ornithologically accurate Oriole, the inaugural Florida Marlins fish logo, and with the Walking Bear. If the Cubs insist on wearing their 1997 uniforms, they should be accompanied by a characteristically 1997 and Sosalogically-informed cap insignia.