Sosalogy in the Cancel Culture Age

If 1pm CNN panels discussing President Barack Obama's (Friend of Sammy) podcasts and President Donald Trump's (also a Friend of Sammy) and Facebook debates involving Glaucoma patients training for the special monster truck circuit are accurate glimpses into the concerns of the average American, then it becomes clear that the greatest threat to society is a subversive cabal ran by Boy George in order to cancel your favorite pieces of media. From Dr. Seuss to Dr. Cosby, citizens everywhere are greatly concerned that everything they enjoyed as a child will be stripped from them by masked authoritarians like in that one Twilight Zone episode, and anyone who isn't concerned has been brainwashed through a complex system of Fake News and estrogen-laced COVID-19 vaccines, much like that aforementioned Twilight Zone episode. Worse yet, they're targeting sports. Yes, sports, once a refuge in which white men can genially observe young black men obeying the every word of old white men in suits, have been politicized. Don't believe the nice truckers with the sunglasses? Then look no further than the upcoming MLB All Star Game, which was originally slated to be played in Atlanta, but has since been moved to Denver in protest of the state of Georgia's voting laws.

The Playhouse does not actually care, as it happens, how much merit any of these culture wars have or don't have. For all we care, Babe Ruth himself could be cancelled to whatever extant a decades-deceased man can be further cancelled, and we would never have to vacate our little enclave of grunge-tinted Dominicana, because Sammy Sosa is the one figure in all of baseball who is #CancelProof. THAT INCLUDES YOU, JACKIE ROBINSON!

Assuming so-called Cancel Culture is an actual phenomenon and an extremely elaborate foreshadowing of Anonymous's attack plans against Wall Street, then the argument in favor of it would be that the realities of prejudice are so deeply rooted into society at a systematic level that even innocent cultural products have implicitly cast a such shadow of oppression on the minority communities that a cultural overcorrection is necessary to heal the wounds of division. Indeed, the story of modern civilization is a series celebrating patriarchal grandeur while women of history are denied the opportunity to express their talents, suppressed if they attempt to subvert the order, and downplayed if they avert suppression. While the past century has seen rapid advancements in the opportunity for female cultural representation, there is no more obvious cultural arena in which masculinity is not only elevated but given exclusive exposition than the arena of professional sports. Despite certain conservatives claiming to care deeply about protecting the integrity of women's sports from the trans menace, the WNBA's primary sources of revenue are the royalties they receive from conservative talk show hosts using their game footage as the visual backdrop of their unfunny lesbian jokes. And we know a thing or two about being unfunny.

American football, the most popular sport in the United States, is a bloodsport which borrows its official vocabulary from warfare, starring monstrously sized men fighting each other in other in literal coliseums before going home and trading the body armor for Wrangler's jeans as they expose their penises to young women and embezzling money from the state treasury's welfare fund — and we're just describing Brett Favre. While baseball, best enjoyed with by hot dogs and apple pie at a park during a summertime afternoon and played mostly by out-of-shape pajama wearers, may be comparatively tame and less exclusively masculine, it is still embraced as a centerpiece of robust Americana while international soccer is seen as a sport for prissy Europeans "men" and [dun, dun dun] women.

Has anyone portraying soccer as the sport of wimps actually watched a full match played by adults? Has anyone on The Playhouse editorial board watched a baseball game since 2007? The answers, both in content and irrelevance, are the same. Baseball is contingent to an uncomfortable confrontation with its history of white supremacy and toxic masculinity, and in the 21st year of the 21st century (depending on how much of a math geek you are), only the example of #21 himself can surmount the hurdles of baseball's sins. Some of them, anyway. What, you expected us to tackle steroid use? Fuck, this isn't Mariano Rivera's Sandcastle.

Sammy Sosa played baseball with a passion that is commonplace in soccer but was — and to a lesser extent, still is — foreign to a conservative baseball culture in which humility and protestant submissiveness is encouraged for the buttoned-down players to practice as they go through the motions of the working man, unless we're talking about the 70s and 80s, 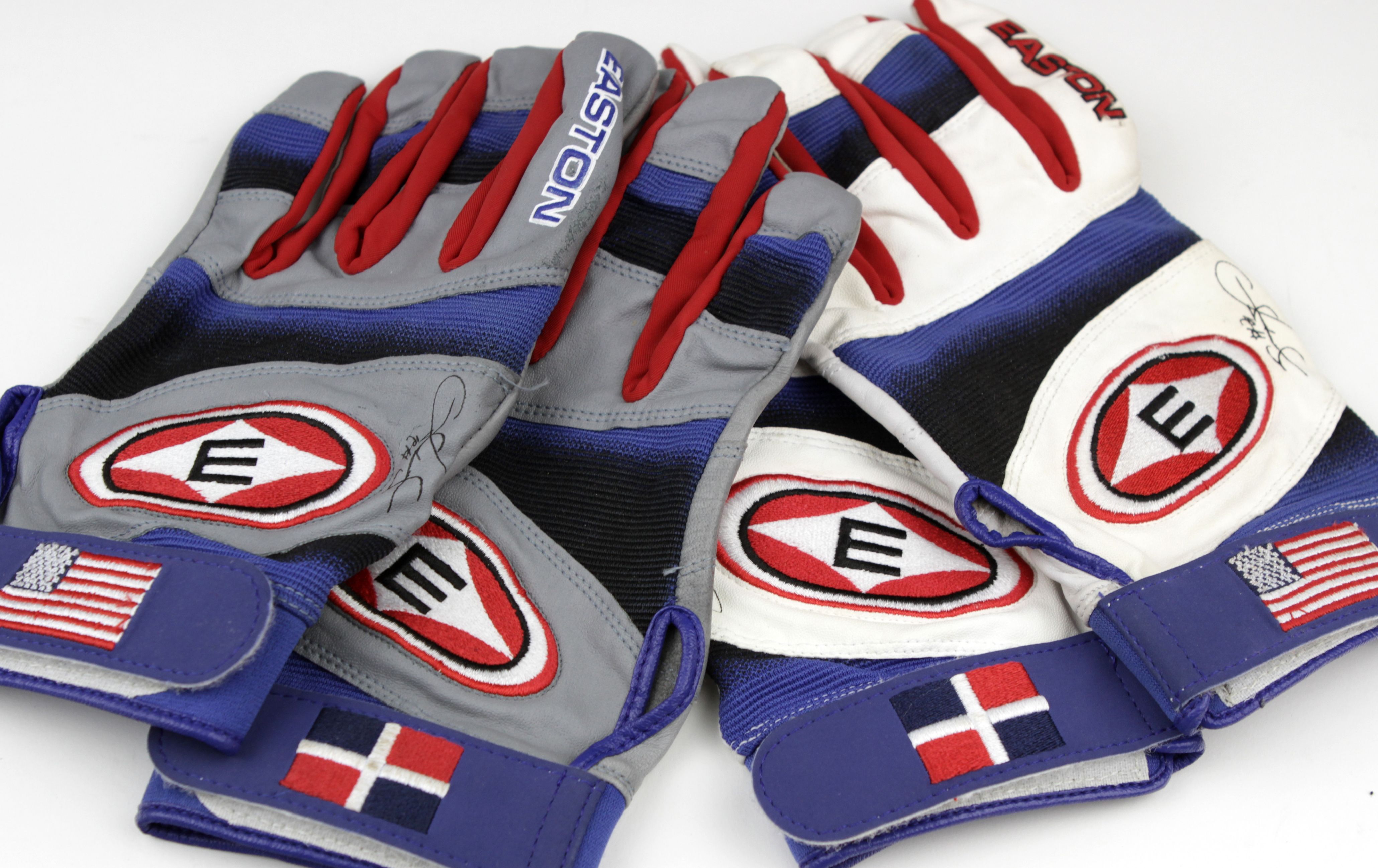 in which most teams wore colorful pullover jerseys. Sammy Sosa ritualistically observed each of his home runs by hopping out of the batters box, tiptoeing on each base, blowing a kiss at home plate, and then flashing a peace sign into the camera. He sprinted to his right field position at the beginning of each game, joyously pointing at the crowd and spreading the message of peace and love. Pundits of the time called Sosa a showboat and ceremonial boating enthusiasts accused him of cultural appropriation, but Harry Caray's face wasn't the on piece of cultural signifier he wore on his sleeve; he also wore a block letter C on his arm to indicate that he, along with Mark Grace, was the Cubs' Team Captain. Those were the only things on his sleeve, but on his batting gloves, be proudly wore the flag of his home country, and soon thousands of white Chicagoland frat dudes learned what the Dominican Republic was and proudly hung the Latin American nation's flag in their dormrooms, their peripheral vision gleaming with parapatriotic pride as they wank to the adjacent Liv Tyler poster on the same wall. If you're not down with international solidarity and sex positivity then those frat dudes would have two words for ya: SUCK IT! 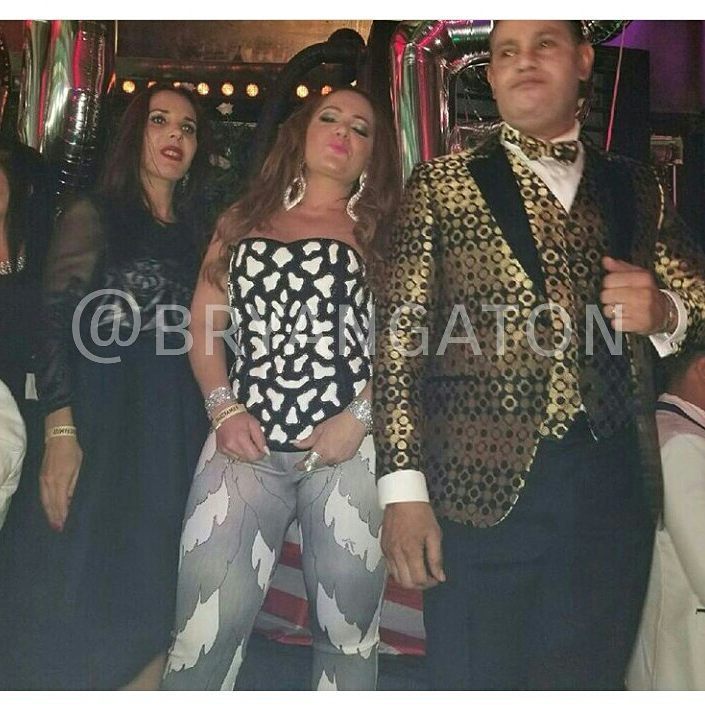 While Sosa has not played in MLB since 2007, he has, in retirement, continued to challenge the patriarchal establishment on which many baseball stadiums, primarily Fenway Park, were built. If Sosa's on-field playstyle broke down barriers, then his off-the-field fashion style united East and West Germany. Baseball is so button-down that they literally added buttons to cotton pajama uniforms, and off-the-field, you'll find most players wearing typical athleisure that suits them to take refuge in the nearest available batting cage in case a soccer player attacks, but not Mr. 609. Watching Sammy play ball, you may think it impossible for him to be any more unapologetically Latin, but once you see him on the red carpet of a salsa award show, his claim that he's qualified to run for the Dominican presidency no longer seems that far-fetched. Violet blazers, leather pants, artificial feathers, futuristic shiny silvers and golds, artificial feathers, formal tracksuits, pink fedoras, non-winter scarves, complete cowboy costumes, and of course, the trademark sweater. Most shirts in Sammy's closet seem to be missing the top four buttons, and that may prevent him from wearing the traditional business suit frequently, but when he does don a necktie, you better believe that shit's tailored to be as slick as his gelled back hair. American baseball culture may consider a strong fashion sense to be too feminine for the its stoic manly men idealized in the proverbial Joe DiMaggimold (the pun didn't sound as gross in our heads), but Sammy's stylish wardrobe flaunts not only a swaggering Dominican pride but a touch of queerness that would make him quite the catch at the local pride parade if his heart was not already taken by Mark McGwire. Oh, Sonia knows, and the love she has for her non-monogamous bi icon of husband could be shared by billions of worldwide sports fans if MLB could abandon its toxic masculinity.

"BUT PAUL", I hear you writing to our netzero account, "Sammy Sosa Has A Self-Hate Problem."

You, dear Blue Checkmark haver, think you're so clever, so woke that you can stump Sammy Sosa's Playhouse? Don't tell me how many BIPOC you employ at HuffingviceFeed or wherever when half of our staff isn't even human, and for the record, Detroit Beisbol Cat Stevens is Muslim and Steve Goatman is a Satanist, so that's like double intersectional points. Refer again to the Dominicanphilic frat dudes and suck it. Who are you to say whether Sammy Sosa embraces his Blackness or not? No matter how he looks, Sammy Sosa still identifies as Black and semiannually honors the sacrifices by Black baseball trailblazers like Ernie Banks and Jackie Robinson as necessary for his experience to exist. And who are you to say whether an Afro-Latino immigrant ought to identify their personal hardships as part of the Black experience more than the Latine experience or the immigrant experience? Sammy Sosa brings people together. Even while popularizing the Dominican flag in the greater Chicago area, he kept a miniature American flag in his back pocket at all times, just in case his former employer with the Rangers ever oversaw a terrorist attack that would change everything. Not only can Black, white, and Latine people all identify vicariously with him, he proudly expresses his solidarity for Cowboys and Sunni Muslims and embraces their traditional garb. The American Pasttime of Joe DiMaggio, Mike Trout, and Rob Manfred is the symbol of an America marred in white supremacy, toxic masculinity, heteronormativity, western chauvinism, colonialism, easy listening soft pop, QAnon, climate denial, and John Wilkes Booth. An American Pasttime of Sammy Sosa would be the symbol of an America that is a melting pot for all people and a shining beacon for democracy, liberty, justice, and cowboys.

If Major League Baseball wants to avoid the #Cancellation of the sport, then they must #PopTheCork and embrace Sammy Sosa. Yes, the real Sammy Sosa. 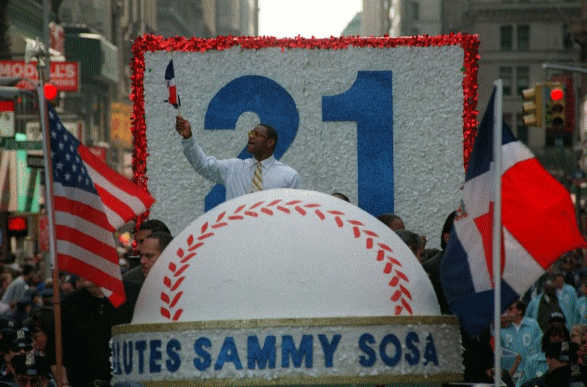