Ken Griffey Jr. should have stayed in the '98 Home Run Race 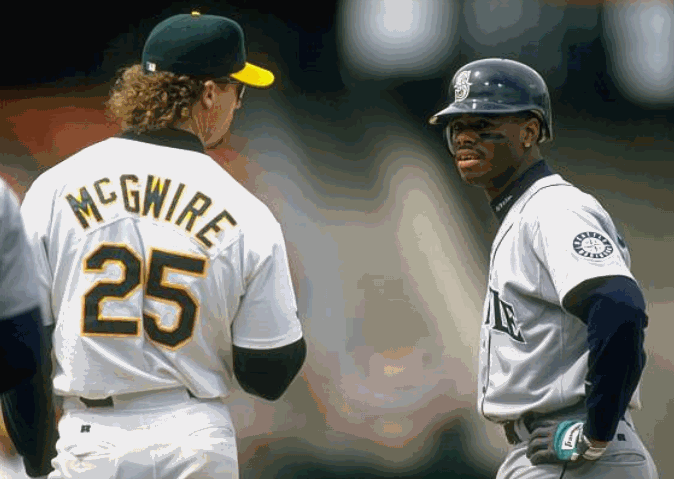 I'm about to speak some blasphemy on Sammy Sosa's Playhouse. The 1998 Home Run Race between Mark McGwire and Sammy Sosa remains one of the most influential angles in baseball history and was the biggest storyline in what became one of the most culturally relevant eras in sports entertainment history. If that angle didn't cement Sammy Sosa into the main event picture, there would be no Sammy Sosa's Playhouse. But let's face it, folks — it happened on a swerve.

Sammy's insertion into the '98 Home Run Race may have come out of nowhere, but the seeds of the whole storyline had been building for years as what would have been a textbook example of long-term booking. The truth is one that most of my Playhouse colleagues don't like to admit, and that's that the plot had been long developing, not around a feud between Mark McGwire and Sammy Sosa, but between Mark McGwire and Ken Griffey Jr.

For as over as Slammin' Sammy got, for how well he worked with Big Mac to elevate the business, maybe Major League Baseball should have kept going with The Kid. We all love getting behind the organic push of an insurgent underdog like Sosa, but it was for good reason that Ken Griffey Jr. was the unquestioned top face of the league before June of '98. Griffey captivated fans with the unparalleled power he got out of the smoothest swing in MLB, the swing that made both casual marks and hardcore smarks turn their heads in awe, which is why his main overarching storyline centered around his destiny to dethrone Hammerin' Hank Aaron as the Home Run King.

Griffey made the Home Run Derby matter, and his dominance in that annual event was a brilliant way to remind fans that he was the chosen one, even if a flavor-of-the-month like Brady Anderson had the lead at the All-Star Break. The fact MLB created an entire event in the Derby tailored to highlight Junior's strength is why it made sense to keep giving The Kid smaller home run-related challenges before he could eventually sniff 755.

The next most coveted number was 61, and if Junior could beat that, nobody could doubt that he could dethrone Hammerin' Hank. It was brilliant storytelling to make it look likely for Junior to break Roger Maris's single season record in 1994 while ending the season before he could do it. That is a swerve done right. You want the audience thinking Griffey can do it, but it would have been foolish to conclude such a history story that early in his career. The only problem is that they never gave us that payoff of seeing the Mariners centerfielder hit #62 because MLB decided pushing Sosa was more important than finishing the biggest storyline of the league

Sosa may have played right field, but his insertion into the angle came out of left field. Not that Sosa is to blame — with how much long-term booking they had going with Ken Griffey, adding anyone else into the feud with McGwire would have been a shoehorn.

Adding McGwire made sense. The reason they cut 1994 short was that it would have been boring to let Griffey win so easily. You need conflict, and Mac was the perfectly imposing heel MLB needed to stand in the way of Griffey's mega babyface. Audiences were already familiar with Big Mac because he already got over in the Bash Brothers and showed us in that stable why he'd be a formidable challenge to Griffey. Just as the heel of such a significant angle as the home run race had to be someone established, we needed a babyface we already knew, and Griffey was perfect for that race.

It was an excellent booking decision to give McGwire a 50-home run season in 1996, establishing Big Mac as a serious threat. The 1997 Home Run Race, which MLB would rather you forget, centered around the Griffey-McGwire feud worked so well because McGwire's '96 run already showed us he could hit 60 if he went off, and we wanted to watch Griffey, for whom 60 seemed more hypothetical, beat out the sure thing. Neither competitor beat Maris that year, but both were smartly left at a high note when the season ended — Griffey with his MVP finish and Division Title, McGwire with his move to the National League where he could be fed new jobbers without affecting Griffey directly.

And that angle got so over in '97 that as the'98 season started, the whole MLB Universe was buzzing about the race to 61, about Griffey vs. McGwire. The pieces were already in place, but Selig decided to do his best Russo impression and subvert everything we expect out of a baseball story by burying Ken in favor of Sosa.

And let's face it, people, there's a reason Ken Griffey became the top babyface in the business while Sosa always lived in the midcard before his '98 push. Sammy can hardly cut a coherent promo in English to this day while nobody could look away from Junior Griffey once he put on his smile. Both players played with flair, but Sammy's hop and hand gestures only worked to generate heat; he was a cocky hot dog with no respect for his peers or the fans. Which is fine, for a heel. A good babyface must be tasteful with his showboating like Griffey. Junior had the backwards hat — which was over as fuck and you know you mimicked it — and his bat-drops, but you always knew he cared about winning above all else, unlike Sosa. Griffey was such a draw that he single-handedly turned Seattle into a baseball town, but Sosa wasn't even a bigger draw than the announcers on The North Side before '98. It's not like MLB didn't try pushing Sosa down our throats before '98 — they gave him two 30-30 seasons and let him chase 50 in '96, but the audience didn't care.

Junior Griffey didn’t need help getting over, he just got over. And he did what responsible top guys do by putting others over. He got kayfabe injured in '95 to give Randy Johnson and Edgar Martinez some spotlight, before he came back to conclude one of the best stores of the '90s. And Junior knew that was all he needed in '95, so he did the right thing and jobbed to the Indians in the ALCS. That's respect for the business. That earns the right to hit 61. Sosa never did any of that.

And what good has it done for the business to give Griffey's rightful honor to Sosa? Even though he got screwed, Griffey is still promoting baseball, appearing on commercials, and doing commentary in Seattle. Sosa, who was given everything he has from baseball, is constantly trying to transcend MLB by making headlines on his own with social media; he won't even return to Chicago.

Baseball may have gotten more popular after replacing Griffey with Sosa, but I hardly think Sammy individually had anything to do with that. Everyone was over in The Steroid Era, even Bagwell. If you look at merch sales which can only be attributed to single players, Griffey did way better during his time on top than Sosa did in his, despite being a weaker era. Sneakerheads are still wearing O.G. Air Griffeys with pride, but the amount of people buying Fila Sosa in 2019 is about the same as in 1999, which isn't very much. All four of Ken Griffey Jr.'s video games on the Super Nintendo and Nintendo 64 are renowned as retro classics, but Sammy Sosa High Heat Baseball is only remembered for Sammy's laughably bad promo for it. Don’t get me started on Sammy Sosa Softball Slam. Nike and Nintendo are more prestigious endorsements than Fila and 3DO, in any era.

There are few meaningful categories where Sammy Sosa was a better fit for the Home Run Race than Ken Griffey Jr. Sure, Sammy had great chemistry with Mac, but if Junior could put Edgar over, he could make anyone look like a million bucks on the diamond.

Some might think "The Kid" was too tailored to the brighter early '90s to stay a star in the darker, edgier late '90s, but like all great ones, Griffey could adapt. Junior traded in his flat top and mustache for a buzzcut and goatee, replaced the teal in his wardrobe with a sleeker navy blue, and ditched his PG-rated Hip Hop buddies, Will Smith and Kidsensation, for a collaboration with Snoop Dogg. He had the look. He still had the smooth style. He had ATTITUDE.

The only explanations I can conceive for why anyone at MLB thought the home run race needed a major swerve is that they thought Griffey had been booked too strongly into a Mary-Sue, or that they fetishized the motto of "anything can happen" so much that they couldn't resist burying a legend just because. And they never recovered from that burial. Ken Griffey Jr. never recovered, and MLB never got a good storyline for their former top guy to stick. His entire Reds run was the most confused gimmick I ever saw. How many injury angles do we really need? And they never even gave us the payoff of seeing Junior become the Home Run King. Instead, the geniuses at MLB gave that babyface title to Barry Bonds, a heel.

Of Course, the Sosa-McGwire fed became one of the best storylines in baseball and Sammy Sosa went on to be a great face of sports entertainment, but it came at the expense of what had long been developing to be one of the greatest arcs in professional baseball.