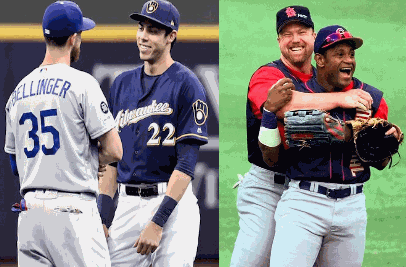 With the All-Star Break in the rear view mirror, Christian Yelich and Cody Bellinger are still on pace to finish the year with at least 60 home runs. It's true, Rob Manfred and the creative team at MLB are serious about remaking the 1998 home run race angle now in 2019.

Retreads of classic angles with new players always bring mixed opinions among professional baseball fans, and when it concerns an angle originally starring Sammy Sosa, opinions at The Playhouse are mixed. No matter what you think about it, the Sosa-McGwire feud was in fact a variation of the classic feud between Roger Maris and Mickey Mantle in 1961. The standard is set for having new home run races for new generations, and with baseball struggling in the ratings these days, now might be the right time to redo the angle that saved baseball in 1998, but the question is, are Christian Yelich and Cody Bellinger the right players for the modern feud? And if not, who fits better?

First we have to identify what made Slammin' Sammy Sosa and Mark "Big Mac" McGwire so good for the 98 Home Run Race. Big Mac was already a mainstream superstar from his Bash Brothers days and was so good that he could still draw like a star going solo. Sammy, while he was a midcard guy, was a known entity for a long time, respected as a worker, and established as the face of the Chicago Cubs like Mark was for St. Louis— kid was due for a push. Mac was obviously the favorite to break 61, so you needed someone like Sammy to be that underdog. McGwire had worked as a heel during his latter Oakland days in a great feud with Ken Griffey Jr., but turned face upon moving to St. Louis by playing up the All-American, soft-spoken blue-collar schtick. Sammy was booked as a cocky heel with the Cubs in the early 90s, but as we entered the edgier late 90s he was getting babyface pops without changing his heel swagger. McGwire and Sosa were both technically faces (arguably Sammy was more of a tweener), but they carried themselves in very different ways that allowed different fans to side with one or the other. Basic Magic/Bird, Hogan/Savage stuff. Sammy was a Cub and Mark was a Cardinal, which was great because they're divisional rivals who play each other 20 times and in the case of these two specific teams, have one of the most storied rivalries in professional baseball. Fans knew they were watching a big development in the lore of the Cubs/Cards rivalry when they were watching Sammy and Mark work. They had perfect chemistry together, and like all Steroid Era superstars, they looked like the believable superstars you'd expect to hit 60. Amazing booking.

Neither Yelich nor Bellinger have the look. Very few players do in this day and age, but they're exceptionally skinny among pro ballplayers. Yelich is renowned for his workrate and he's already got an MVP award to give him credibility and notability with mainstream fans. The Brewers team Christian is unquestionably the face of has a fun, charismatic supporting cast with larger-than-life characters like Jesus Aguilar and Orlando Arcia, and this team is always putting up exciting games with their NL Central rivals; they're do for a push. Cody Bellinger is a mainstream star already by virtue of playing for a Los Angeles team that has won two pennants in Cody's first two years, but for all the accomplishments Cody has had in his short career, is he really the face of the Dodgers? The excellent Clayton Kershaw is still the biggest draw in LA, and as far as hitters go, Justin Turner is clearly the most over among hometown fans. Turner may look like an unconventional superstar, but that can keep the business fresh even when redoing an old storyline, and the man has a great power swing and a muscular build for today's era. Most importantly, Turner has charisma that Bellinger can't dream of. Yelich ain't too hot in that category either, I don't care how good his workrate is.

I'm fine with picking a Dodger and a Brewer to compete for this prestigious title in theory even though they're not division rivals. The big market pennant winners vs. the young, small-market upstart makes for a good narrative, but in practice, you want to have players who are gonna meet each other more often. I feel like they're going Dodger vs. Brewer because the more traditional options have been played out. Kudos to Manfred for resisting the temptation to book Javy Baez of the Cubs and Paul Goldschmidt of the Cardinals in this angle; that would be straight self-plagiarism as Javy is a total ripoff of Sammy Sosa's showboat Latino gimmick, and while Goldie was super over in Arizona, going to St. Louis would make the All-American, blue-collar Cardinals first-baseman role too obvious. Aaron Judge and Giancarlo Stanton both have The Look and the personalities you want from a superstar slugger, but them both being Yankees would be plagiarism of the original Maris/Mantle angle in 1961. The other shame about Bellinger is that the Dodgers don't need this big angle to draw.

Who MLB really needs in this angle is Mike Trout. He's the top guy in the business in every way, but Manfred and the Angels are too incompetent to get the poor guy over. The home run race is proven to put ballplayers on the national map, and Mike Trout is as perfect for the home run race as he is perfect for being the face of baseball. He's got the abilities the be believable in this booking, obviously, but he's also got The Look in a way that few modern superstars do. Every season they boost Trout's power numbers, and this year is no exception, so why not go all the way and push him towards 60? This shit books itself. The only hard work you have to do is find someone to race against him.

Just looking the AL West, the obvious team to beat for the Angels is the Astros, but they don't got the right candidates for 60 home runs. Bregman's got the mic skills but he's still a little green and Altuve should be an obvious non-starter. Why not look to Oakland for Trout's challenger? The A's have two great candidates: Matt Chapman and Khris Davis. The hook with Trout vs. Chapman would be the home run race doubling as a competition between baseball's undisputed best player and one of the runners for #2. The problem with a Trout-Chapman feud would be that neither of them have the best charisma to excite the national spotlight. To make up for that, you can swap Matt for Khris Davis. He's no superstar and workrate nerds will cry foul at his OBP, but the man has as much power as anyone in the game, he's got the look, and decent mic skills.

The biggest problem with redoing the home run race in 2019 is that MLB wants to induce power with juiced balls instead of steroids. With juiced balls you got midget infielders like Altuve hitting 30 home runs and it devalues the longball. Chicks may dig the longball, but we're more than halfway through the season and nobody cares that Manfred is redoing the home run race. That's because the chicks don't care when the longball is being hit by dudes who look like they belong at an arcade bar. In the Steroid Era the main eventers were hitting 60, and sure, your upper midcard guys were hitting 40, but only if they had the look. The scrappy cruiserweights weren't hitting more than 20, but those guys are hitting 34 nowadays. And you gotta let these guys work the mic. How are fans supposed to know who is the babyface and who is the heel out of Yelich and Bellinger when they don't know anything about them? All I know about Cody Bellinger is that he's never seen Seinfeld, and I think I read something about Christian Yelich is that he likes giving rimjobs. That's our angle? An ignorant zoomer gimmick vs. an analingus enthusiast? The only way that'll put butts in the seats is if we replace Bernie Brewer throwing t-shirts to fans with Christian Yelich throwing his tongue around.