The Sosalogical Definition of Race 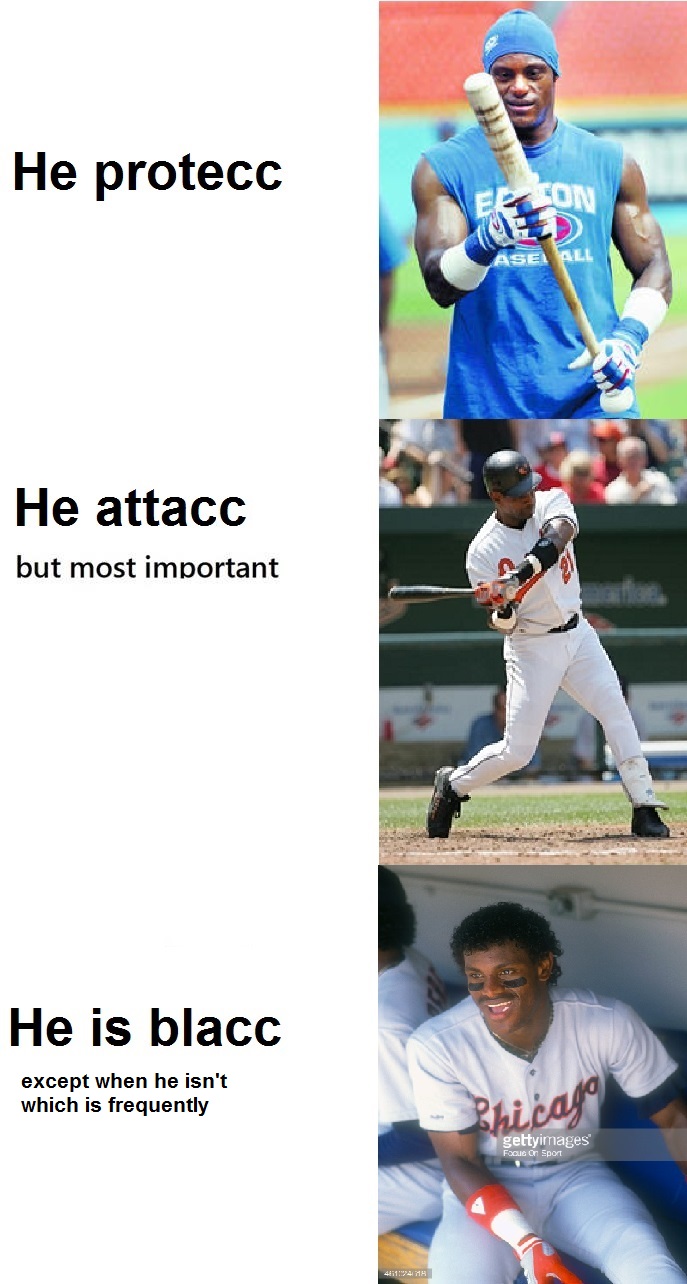 Bust out your copy of the 3DO-developed Playstation classic, Sammy Sosa's High Heat Baseball, because it's time for some #SammySosasHighHeatHotTakes!

There's been much disagreement about how to define race. I mean, what the hell even is race? Is it a measurement of the amount of melanin in one's skin, or is it akin to their ethnicity? Is one black because they have a high amount of ethnicity of melanin or are they black because they are of African origin? Who's more black, Yasiel Puig or Freddie Mercury. Freddie Mercury clearly had white skin, but he was from Africa; Yasiel Puig clearly has black skin, but he is from Cuba. Are either of them black? Is anyone black.

What the fuck is Sammy Sosa? He's a black guy who bleached his skin white, right? Clearly, you would define Sammy as ethnically black but physically white in terms of melanin count. But wait! He's not ethnically African, he's Dominican!

When Ernie Banks died in January of 2015, Sammy posted on Facebook and Twitter "I wanted to express my sincere condolences to the family and fans of #mrcub, the legendary, #ErnieBanks. He was the first African-American to play for the Chicago Cubs paving the way for many future baseball players like myself." During this time, Sammy had that brown-ish skin color he usually has during periods in which randos on Twitter aren't being outraged at him for existing, but there Sammy is right there, identifying as a black man.

Sammy Sosa is the single most important figure for sociologists, biologists, and psychologists to overcome their disagreements on what race is. Oh yeah, we're fucking going there.

Race doesn't exist beyond societal symbolism. It wasn't a real thing until society actively decided it was, which is to say it's still fucking made up. Yet still, race IS real because society sorta can't be ignored unless you reside in an isolated playhouse filled to the brim with corked bats and boomboxes out of half-ironic appreciation of an irrelevant baseball player from twenty years ago. Most of us have to live in society, so even if society makes shit up, we still have to deal with that manmade make-belief. So race IS real in that we all have to deal with the consequences of such social construction.

Sammy Sosa was never inherently black because nobody is. But still, he had (and still sometimes has) black skin. And when he first turned white (and nine years after he first turned white when a bunch of Twitter Twats were reminded Creme de Sosa is a thing that exists), everyone looked at Sammy and collectively said, "woah, that nigga looks white now. Weird." Sammy Sosa's white skin is a painful reminder to society that their labels of black and white are manmade labels which don't affect anything on their own until society decides they do after the fact. Society already saw Sammy's dark skin and decided that he fit the standard of what has been deemed a person of color. Then he lost the one feature which was used as criteria for that label, and that fucks shit up, but society cannot give up the fact they already labeled Sammy black, so he is not seen as a white man, but rather an ethnically black man who has white skin.

WAIT JUST A MINUTE, SOCIETY. You thought you could get away from me, but we're not Red Sox fans, so get that John Kerry windsurfing out of here. You decided that what made a man black or white was the color of a skin. Then when you were confronted with a man you decided was black, but then turned white, you refused to back down on the black label by changing the criteria of blackness to mean ethnicity instead of skin color. Society, you fell into my trap, because you just showed your bullshit.

You can't say that what makes a man black is his African ethnicity, while still saying that Sammy is a man of black ethnicity, because Sammy is not African. He is Dominican. Is it skin color or ethnicity? Make up your damn mind. You can't, because it's bullshit. Race isn't real.

Not only does society still consider Sammy to be a black man, Sammy himself considered himself a black man during a period of time in which his skin was not black (it wasn't exactly white either, but it was a far cry from his MLB-era complexion). But that doesn't mean race is actually real. It just means that the conditions created by society's decision to make note of something it determines race have consequences on real things, like how people treat other people. Race isn't real, but racism is. Racism is a real consequence of how certain people react to the made-up notion of race, and it causes people to do real things, like hating another man.

Sammy could have green skin at some point for all we know — and let's be real, he probably will eventually — but that would never take away the real experiences that he experienced in his life due to his original skin color. He had skin which was deemed indicative of a black man, and as a result, racists hated him. For years, the home run hop, the peace sign, the chest bumping, the 30-30 chain, the boombox, all of that shit was used as fuel for racist things media would say about Sammy Sosa. That Sammy kid is cocky, he only cares about himself, he's not a team player, he just wants to be famous, all that shit was said about Sammy. It was said because he was black. And those were real words that were used, real fans who booed him, real op-eds that were written about him. It doesn't matter what Sammy's skin color is, those were real things that happened to him and will always be with him. So he will always be black for those real reasons.

But, you see, he's also not black. But he is. Nobody is. Except for those who are.

Some maintain that the measure of what makes a man a member of the black race is his black skin. Others maintain the measure of the black race is his African ethnicity. Sammy's ethnicity is not African, and his skin is no longer black, yet he is a black man. He is a black man because neither of those arbitrary qualifiers of race are actually real, concrete, natural things, so race itself is not real. What is real, is things which manifest from the notion that race is real, such as acts of racism.

The only true method to define race is through Sammy Sosa.