Jeb! Bush and Derek Jeter want to team up to purchase the Miami Marlins. Surprised? Sounds like that came out of left field, right? WRONG! It actually came out of RIGHT FIELD, because it all goes back to Sammy Sosa. And it will lead to a nuclear holocaust in the name of communism.

Jeb! Bush is the brother of former President George W. Bush. George W. Bush used to own the Texas Rangers, and while owning the Rangers he traded Sammy Sosa to the Chicago White Sox, which he considers to be his greatest regret (note: he said that before Iraq, but we'd like to think it's still his greatest regret). Sammy Sosa is good friends with current President Donald Trump, and former Presidents Bill Clinton and Barack Obama; in fact, Sammy was the guest of honor at President Clinton's 1999 State of the Union address.

Sammy was also a diplomat for the Dominican government in 2005, which is why even post-presidency, Dubya would consider trading Sammy to Chicago his greatest regret, because many foreign countries turned against President Bush and his policies during his presidency, and it is quite possible that Sammy lobbied the many governments he worked with to oppose Dubya's America. Derek Jeter was teammates with Jorge Posada for many years. Jeter and Posada played against Sammy Sosa's teams in 18 games, not counting All-Star appearances. J. Posadas was the pseudonym of Homero Romulo Cristalli Frasnelli, a revolutionary Trotskyist who believes that the only way to bring about a communist revolution is with a nuclear war that would materially destroy capitalism and make way for socialism.

Internet tankies and anarchists have recently appropriated Governor Jeb! Bush as an ironic communist revolutionary symbol, mostly because, like any true comrade, he once said he would kill baby Hitler if he ever had the chance. But what if it wasn't that ironic? What if Jeb! Bush has actually been a closeted Posadist who wants nothing more than for aliens to destroy the material realizations of capitalism to make way for communism? While George W. Bush made the mistake of trading away a young Sammy Sosa in 1989 and thus alienating every ally to the Dominican Republic, if Jeb! were actually a communist, he would hate his brother deeply and ally himself with his brother's enemies, such as Sammy Sosa. Sammy Sosa has been running the United States executive branch ever since the Bill Clinton days, so he really is the most powerful being our world has ever seen and would definitely have the means to bring about a revolution if he wanted that. All that Jeb! would need to do in order to build communism is convince Sammy to follow the teachings of J. Posadas. What better way to do that than to team up with one of Jorge Posada's closest comrades — Derek Jeter — in the very realm that George W. Bush used to alienate Sammy Sosa: baseball team ownership.

That is why Jeb! Bush and Derek Jeter are teaming up to purchase the Miami Marlins. 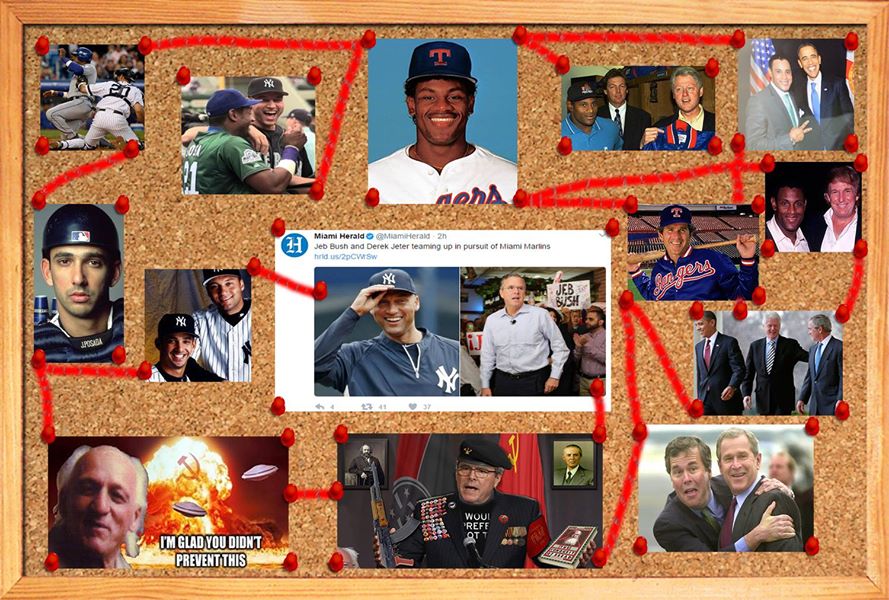