The Baseball Hall of Fame exists to make sure the greatest players are not lost to history. Babe Ruth, Ted Williams, Walter Johnson, Jackie Robinson — these are the names we remember, and the Baseball Hall of Fame stands in Cooperstown to assure that future generations can learn and relive the memories of these legends. For baseball players, the only way to assure that you will never be forgotten in time is to find your way into Cooperstown.

However, the Baseball Hall of Fame has been corrupted by the BBWAA's clinging to Baseball Moralism. The pretention of the Writers' Association has sought to erase the 1990s from existence, to make sure that the legends are forgotten instead of standing next to Ruth and Mays.

Sammy Sosa has fallen victim to the BBWAA's revisionist assault. They want to make you forget Sammy Sosa, and they will keep him out of Cooperstown to assure he is forgotten. Fortunately for justice, Sammy has other ideas.

Sammy Sosa has ascended Cooperstown. He does not need the Hall of Fame to keep his memory alive. All he needs, apparently, is a hat and a pair of cowboy boots. Watch out, BBWAA, because despite your efforts to erase Sammy from history, one of these days his boots are gonna hop all over Cooperstown. 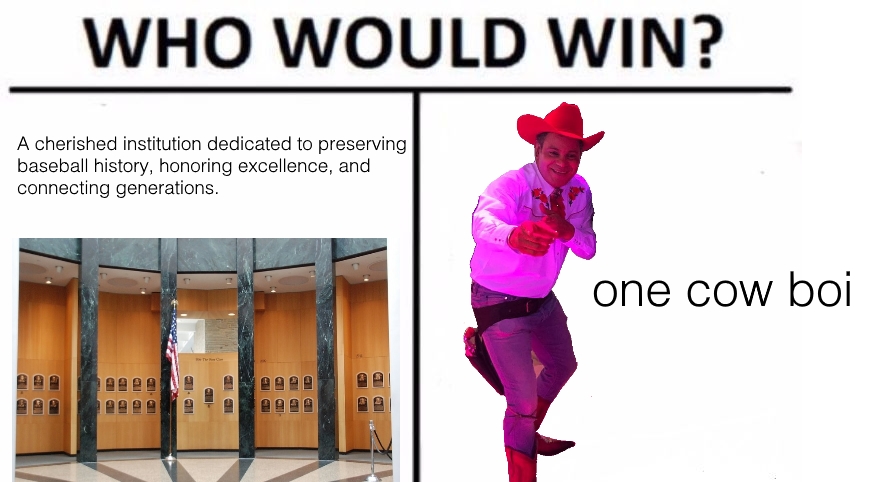