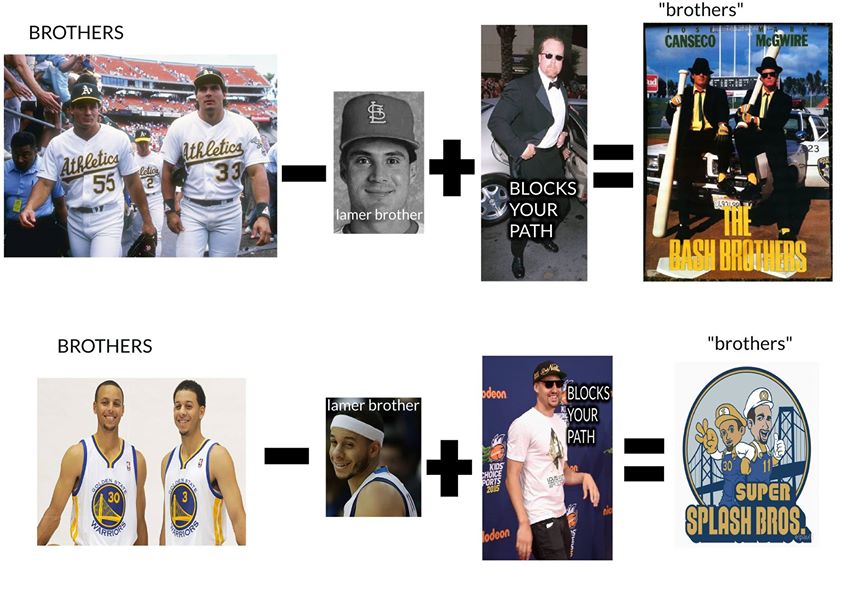 The feel-good story of the 2019 NBA Western Conference Finals is the familial connection between Golden State Warriors' Steph Curry and Steph's brother, Seth "Steph's Brother" Curry of the Portland Trailblazers. How soon we allow the media's blithesome narratives distract us from dark truth of families. We should also not let these stories distract us from the 3-1 lead which the Golden State Warriors blew in the 2016 Finals to a team located in the same city as the Cleveland Indians, who blew a 3-1 lead in the 2016 World Series. We especially should not be distracted from that last one; we covered it extensively on Sammy Sosa's Playhouse because that year's MLB postseason featured the team that made Sammy Sosa famous, the Texas Rangers.

The propaganda factory consisting of ESPN, Bleacher Report, and Mike Korzemba is working to engender subconscious sympathy for the American nuclear familial structure into the hearts of Chinese NBA, as per the bidding of the United States Government. Just as the U.S. lobbied the Olympic Committee to allow professional participation in an attempt to lower the morale of the Eastern Bloc, the U.S. wishes to weaponize sports again to suppress emerging economic power of the People's Republic of China. With the National Basketball Association's phenomenal popularity in China, there is no other sport with which American media can invade the Chinese household. Well, there is soccer, but the effectiveness of that Trojan horse attack hinges on the American media understanding soccer.

The lessons of this particular propaganda campaign can be made clear through 90s baseball parables.It is the duty of Sammy Sosa's Playhouse as bastion of watchdog journalism to use our extensive research to inform that they are being lied to.

Steph and Seth Curry do not constitute a feel-good family story; they constitute a betrayal of brotherhood. While Dell Curry's eldest son is the greatest shooter the NBA has ever seen, his younger son has made his career as a serviceable role player. Still, it should be impressive that any two brothers could be among the best basketball players on the planet no matter the skill disparity between the two. That incredible incidence should be so notable that it is mentioned whenever either brother's accomplishments are listed. But when Steph Curry's legacy is tied to a brotherhood, it is not that of his blood.

Steph Curry is a famed member of the Splash Brothers, an infamous cult known for their three-point extremism. The other Splash Brother is Klay Thompson, who may be the brother of White Sox legend Trayce Thompson, but is not the brother of Steph Curry. The Myth of Seth becomes more tragic with the revelation that Seth Curry was originally signed to the Warriors, but was released before ever leaving the D-League.

This is not a feel-good story, but this calculated attack is a farcically parallel repetition of historical tragedy. One does not need to look far from the Bay Area to recount this past, as contrary to the zoomer-customized t-shirt market's assertion that the Splash Brothers namesake is a reference to shitty Nintendo games, it should be obvious that the reference is to Oakland's greatest slugging duo of all the time, the Bash Brothers.

The Bash Brothers Jose Canseco and Mark McGwire have received significant coverage from The Playhouse for years, both as a group and for each contributer's solo work. The impact of Jose and Mark on Steroid Era Baseball goes without saying, but what goes with saying is that the Californian Mark McGwire and Cuban Jose Canseco are not actually brothers. If that revelation was a supererogation of your childhood innocence, then we advise caution with respect to any prospective Atlanta Braves postings on The Playhouse. Some corks shouldn't be popped.

Despite the stars of the Oakland A's's middle lineup not being related, that same American League dynasty team featured actual biological brothers. Jose Canseco was one of them, the other being his identical twin, Ozzie. Ozzie was not invited to join the formal Bash of his literal brother.

The consonance extends to the degree of mathematical law. Take a pair of actual brothers playing for an Oakland sports team, subtract the less talented brother and replace him with a more talented, goateed athlete who bears no relation, and you have the new "brothers." What does the American culture expect of the sabotaged brother in this equation? Complacency and gratitude.

Seth Curry is not allowed to reap the fruits of the brotherhood from which Steph disowned him, but he is asked to oblige in the warrior wassail anyway. Seth Curry is asked to give faithful support to the very power structure that was stolen from him. It is a cold reminder that the meaning of the word famulus, is slave.

Ozzie Canseco was asked to give the same credence to the family that abandoned him. Despite never being offered a seat in the Bashed Brotherhood, Ozzie submitted undying commitment to Jose. How did Jose repay this familial loyalty, years after the dissolution of the Bash Brothers? By sending Ozzie out to take his place in an MMA competition which Jose was set to compete in. Jose also dragged Ozzie into a nightclub altercation for which both brothers were arrested. This is the likely future for Seth Curry should he accept the sports media's sanctioned fate for him.

By framing the shanghai of Seth Curry from his biological brotherhood as heartwarming to the citizens of Shanghai, everything about the American way of life will seem more sympathetic to the Chinese. Whereas Chinese Philosophy teaches pragmatism through socialism with Chinese Characteristics and responsibility intrinsic to procreation through requiring commitment to children, the American way teaches that every opportunity can be capitalized upon. This starts at home, in the family, where one can exploit their own flesh and blood in order to upgrade to something more profitable. If the NBA's Western Conference Finals can teach Chinese fans that such capitalization of family members is ethically admissible, then perhaps they will sacrifice some of their national pride for compliance to America's continuous attempts at hegemonic preservation in the South Pacific.

This is the precise opposite of #BasketballDiplomacy. This is #BasketballImperialism