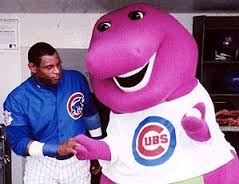 What we're saying is, please get away from us, because you're probably a rapist.

What we're also saying is, it's sometimes tough to reconcile certain preferably aspects of a person with those aspects which drew you to them. The Playhouse has more experience making these reconciliations than we would ever wish on our worst enemies. You get off this time, Bud Selig.

The 1990s were all about cool. GRUNGE MUSIC! BLAST PROCESSING! EXTREME SPORTS! NON-EXTREME SPORTS BEING PLAYED BY MEN INFESTED WITH EXTREME QUANTITIES OF STEROIDS! It was rad, but you know what wasn't rad? Barney the Dinosaur.

Barney was the antithesis of everything we believed in the 90s. Barney was a dinosaur from our imagination, but it was the part of our imagination that was instilled in our collective consciousness as a punishment for Eve taking a bite out of that forbidden tree. That's what I learned through my intelligent design-based biology curriculum anyway. Barney was lame and puritan. He promoted boring kids stuff like "love" and "sharing" and "friendship". Friendship? It's the 90s, bitch, the only friendship is in Mortal Kombat II.

It became a rite of passage, a regular activity to fucking hate Barney the fucking dinosaur with a passion. Holiday ditties were lyrically altered to be sang "joy to the world, Barney is dead, we shot him in the head", many GeoCities pages were dedicated to grotesque doodles of Barney being brutally mutilated, and so on. Us sports fans rejoiced in watching Charles Barkely beat up and dunk on Barney on Saturday Night Live, when it was still quality television.

Yet Barney was also a #FriendOfSammy.

It was difficult for us Sosalogists to wear our Yellow Sweaters on the Playground at the same time Barney was hanging out with Sammy in the Wrigley Field dugout, for more reasons than the fact that Sammy Sosa would not yet be associated with yellow sweaters for close to two decades. How could anyone possibly argue that Sammy Sosa was cooler than Mo Vaughn when it was Sammy that was shaking hands with Barney?

Tears were shed over our math notebook doodles of Barney's decapitated head as we attempted to justify how Sammy Sosa, yes, the real Sammy Sosa, could dare to be seen with the personification of everything we hated. It was at that point we realized Sammy was playing the long con.

Any scrappy infielder can publicly denounce Barney from a distance, but it takes a true slugger to meet him face to face in the name of sabotage. You can't kill Barney overnight. It's a process. You need a transition stage where Barney can survive in tandem with the conditions around him, until those surrounding material conditions evolve to the point that Barney will naturally be redundant and the world can rise up to put Barney to justice. Sammy Sosa isn't a utopian; he gets shit done. The Playhouse could see this. This is why we bought into Barney Decapitation with Dominican Characteristics.

And when's the last time you heard of Barney? Exactly.